At the California Trail Interpretive Center, we invite you to learn more about one of the most tragic stories of westward migration: the tale of the Donner Reed party. Suffering from a combination of bad timing, false trail information, and unforeseen weather, this large party of 89 people from both the Donner and Reed families would arrive in California, but only after losing more than half of their members.

Listen To The Start Of The Donner-Reed Story.

The Donner-Reed party was formed in the early spring of 1846. Economic difficulties and dreams of Manifest Destiny were contributing factors for most of these travelers in deciding to set out on what would become a challenging voyage.

“We are joined to-day by nine wagons from Illinois, belonging to Mr. Reed and the Messrs. Donner, highly respectable and intelligent gentlemen, with interesting families.” – Edwin Bryant, 1846

The promise of free land and a better climate drew the James Reed and George and Jacob Donner families to travel the California Trail. The Donners were prosperous farmers, and Reed was a successful contractor and furniture maker. Their party included 33 people: 12 men, 5 women, and 16 children. 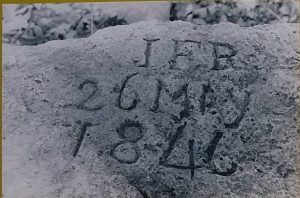 The promises of land and opportunity in California were tremendous and seemed to outweigh any risks. However, the planning of the trip took longer than imagined, and the group did not start on their journey until May 12th; long after the ideal start time of mid-April.

Another contributing factor to the tragedy was the use of an untested wagon route, known as the Hastings Cutoff. Lansford Hastings had written a travel guide promoting this new course, named after himself, and claiming it would save time.

Hoping to make up for lost time, the Donner-Reed party chose to take this path and found themselves even more delayed. The shortcut was actually a detour that cost many precious days of travel time.

Tragedy In The Mountains

By the time the party reached the slopes of the Sierra Nevadas in October, it was too late. An early blizzard made the trail impassable, trapping them in the mountains. Determined to make the best of things, the parties set up camps near Truckee Lake.

Things went from bad to worse. The cattle were slain and consumed, followed by pets, and then eventually hides and bones. The weaker and younger members of the party began to die.

A group known as the Forlorn Hope set out to find help. They resorted to cannibalism along the way, and eventually, those left in the camps did, too. While this is the most reported and sensationalized aspect of the Donner-Reed party’s tragic story, not every family resorted to this practice.

Eventually, though it took months, the party was ultimately rescued, with 45 members surviving the ordeal. The Reed and Breen families survived intact, but the others lost many members.

As stories about the party became publicized, survivors had to come to grips with a gruesome celebrity. Eventually, life continued, but the impact of their journey is still seen today. For example, the mountain pass and Truckee lake have been named Donner Pass and Donner Lake, and the story is still an important part of history classes across the nation.

Here are a few other fascinating facts about the Donner-Reed party: