Imagine traveling between fifteen hundred and two thousand miles at a steady pace of two miles per hour. For months at a time, overland pioneers moved alongside their California Trail animals at about this speed. If emigrants and 49ers drove the westward expansion, these intrepid beasts of burden were the vehicle that made this trip possible.

Learning To Pioneer Alongside The Animals

Some travelers were experienced with handling animals in a farm setting. However, getting them accustomed to the trek to Utah, Oregon, or California was a whole new venture for both the four- and two-footed companions.

“Overlanders learned how to deal with many new situations along the trails, such as trading with the indigenous populations for fresh animals, performing veterinary procedures, and handling the livestock during storms and while crossing rivers.” – Diana L. Ahmad, Great Plains Quarterly

With 10+ hour days ahead, most pioneers chose oxen to pull their covered wagons. So, what are oxen anyway? These were “working” domesticated cattle (like beef or dairy cattle) that were specifically trained to pull a load under a yoke.

Steers were better than bulls at pulling wagons for their endurance and speed. Although these cattle were not usually specifically bred to be draft animals, there were commonly used oxen breeds on the trail.

Speaking of breeds, experienced pioneers like Lansford Hastings and John M. Shively wrote guidebooks geared towards potential California Trail emigrants with advice to pick up cheap horses and then trade them with Native Americans along the trail.

“[T]he shabbiest Shawnee pony you can pick up will answer your purpose better than the finest horse you can take from the stable.” – John M. Shively, Route and Distances to Oregon and California, (1846)

Some pioneers preferred mules to horses for their reputation for hardiness. Travelers figured these animals would be able to handle the long distances and rough terrain better. Inexperienced mule wranglers didn’t find them as easy as they had hoped to train, though.

Cows were used for milk, food, and as draft animals, believe it or not. Out of necessity, the Mormon pioneers had milk cows pulling about 20% of their wagons. It took about two cows to equal the strength of one ox.

Starry the milk cow “pulled in sunshine, rain, and heat over dry, rocky, muddy, sandy, level, hill mountain roads, across sloughs and swiftly-flowing creeks and river, for months [all while being] very generous with her milk.” – Charles Frederick True, California Emigrant (1859)

The Challenges & Dangers Of Animal Husbandry 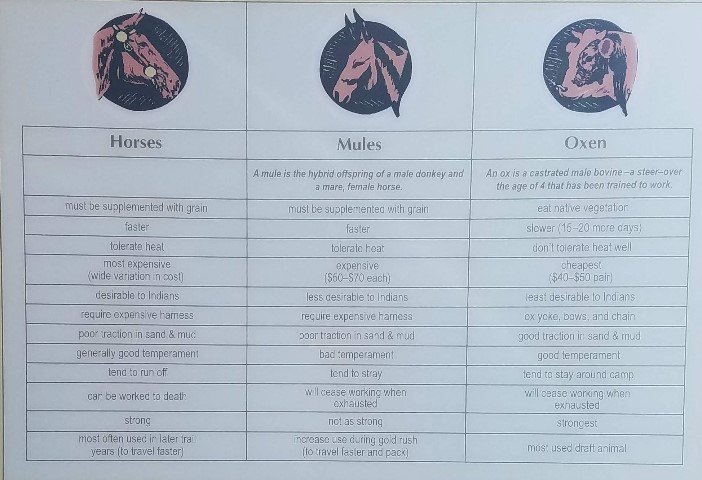 Whatever draft animals you decided to bring along to pull your wagons or feed your family, you had to think of the upfront costs and potential dangers. Besides the obvious food and water, your beasts of burden had other requirements: shoes, nails, yokes, pickets, ropes, halters, and saddles, for instance.

According to the National Park Service, injuries from handling domestic animals were one of the most common killers on the trail. The animals themselves also suffered in many ways.

The Investment That Paid For Itself

Despite the learning curve, loss, and work these animals involved, they often paid for themselves through the services they provided their owners, not only on the trail but once they arrived at their destination. Because the west was growing quickly, horses, mules, oxen, and cows were in demand.

A cow you paid $30 for in Independence, MI, could be sold in Oregon for between $150 to $200. This gave pioneers a great start to a new farm or settlement.

If you’ve enjoyed reading about the animals pioneers brought with them on the California Trail, we invite you to learn more with us at the California Trail Interpretive Center in Elko, Nevada. Explore exhibits, participate in activities, and watch the US emigrant journey west come to life.