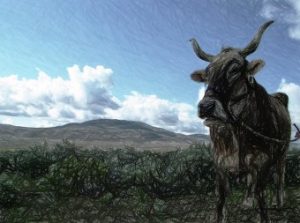 Oxen were the most common draft animals used to pull emigrants’ wagons. They were cheap, sturdy, reliable, and could eat native grasses along the trail. Without oxen, many emigrants would not have been successful in crossing to California.

-Oxen is the plural of ox
-In 1846, emigrants paid about $25 for a yoke of oxen. Today, that is more than $600.
-A person who drives oxen are called bullwhackers or teamsters.
-An ox can live to be 16!
-Oxen hooves are cloven (split in two) so they need 2 shoes per hoof.
-Oxen are hitched together by a yoke.
-To make an ox turn right, say, “gee!” To make an oxen turn left, say “haw”.
-Oxen are adult, male cattle of any breed, used as draft animals.
-On average, oxen walk 2 miles per hour, just like us!