At California Trail Interpretive Center in Elko, Nevada, you can step back in time to learn about the old forts that were a welcome oasis for travelers along the California Trail. Many of these historic forts were originally fur trading outposts that offered supplies to trappers, friendly Native American tribes and early pioneers on their trek to California. Some were eventually abandoned when the fur trade tapered off, and some became military outposts to protect travelers on the California Trail.

Forts On The California Trail

Beginning in Kansas and ending in Northern California, emigrants traveling the California/Oregon Trail visited many forts on their way to the gold fields of California, including:

This United States Army installation was the first stop on the westward journey for thousands of settlers, soldiers, preachers and Native Americans.

First called Fort Childs, Fort Kearny was not only a sentinel post, but also a supply depot and message center on the early part of their journey for the many settlers and fortune seekers headed to California. Food was often sold to the travelers at cost or even free, and the fort provided the first mail service on the California Trail. 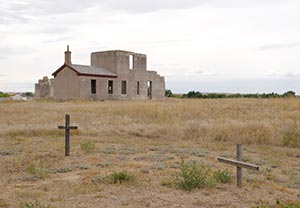 First called Fort William, it was originally a fur trading post where the Cheyenne and Arapaho traded. Even before it became a military fort, it was also a safe haven for settlers, providing supplies to wagon trains heading west along the California Trail. Adobe brick buildings replaced the original wooden stockade, and it was renamed Fort John in 1841. Since it overlooked the Laramie River, it was more commonly called Fort Laramie by travelers. It officially became Fort Laramie, a United States military post in 1849, established since previous peaceful relations between the Plains Indians and travelers grew more hostile as the number of emigrants increased.

Originally a fur trading outpost established by mountain man Jim Bridger, the “Daniel Boone” of the Rockies, Fort Bridger became a primary supply source for wagon trains on the California Trail. In Lansford Hastings’ 1845 “The Emigrant’s Guide to Oregon and California”, travelers to California were urged to leave the Oregon Trail at Fort Bridger, cross the Great Salt Lake Desert, loop around the Ruby Mountains and return to the California Trail seven miles west of Elko, Nevada.

Fort Hall became a major stopover for travelers headed for California. Located at the end of the 500-mile route from the East, it was the last outpost shortly before the California Trail diverged from the Oregon Trail and headed southwest to California.

Close to the end of the California Trail, it was founded by John Sutter who also owned Sutter’s Mill where the discovery of gold started the California Gold Rush. Built of adobe, the fort was all but abandoned when the Gold Rush began, but has been restored to its original condition by the State of California.

Due to Covid-19 this facility will be closed until further notice.