Due to unforeseen circumstances, this program will be canceled for the time being. We plan on rescheduling at a later date. We apologize for the late notice and any inconvenience. 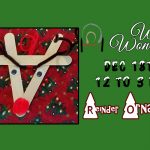