To ensure the safety of our staff and visitors during the Covid-19 outbreak the California Trail Center will be closed temporarily. All events will be cancelled until further notice. We apologize for any inconvenience.

The role of the Judeo-Christian observance of the Sabbath had been influential in shaping early American culture, but it was sharply challenged on the Overland Trail. A large portion of those headed to California wished to maintain a more or less traditional observance of the weekly religious day. On the trail, however, their wishes were either overridden by non-Sabbath-keepers, or their predisposition to rest on Sunday gave way under the pressure of necessity. However, some emigrants were exemplary in observing the Sabbath on the trail. Their conduct on the westward route goes far to refute the prevalent notion that the Americans who journeyed to California during and after the gold rush were godless, irreligious, or immoral. Join Ranger Steve Owens as he describes the various descriptions of Sabbath observance as recorded in emigrant diaries. 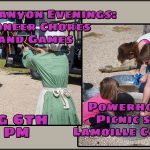