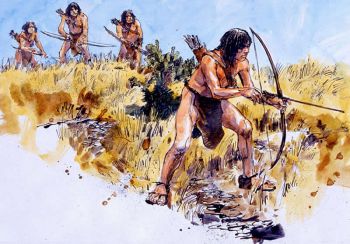 The magnificent narrative of Westward Expansion was perceived much differently by those who first inhabited the lands west of the Mississippi—long before any European stumbled upon them.  All American Indians experienced the effects of the California and Oregon Trails in one way or another, but the Plains, Great Basin, and North Western Indians felt the greatest impact.

Prior to European contact, American Indians cultivated strong and complex cultural identities that trace back over 10,000 years.  Hundreds of tribes and/or bands, each known to have their own unique languages and dialects, social, political, and economic structures, cultural values, and forms of spiritual life, lived along what was to become the California and Oregon Trails.  Trans-continental trade routes, multi-national confederations, and great wars existed in the Americas hundreds, if not thousands, of years before Christopher Columbus unknowingly set sail for his first venture to the Americas.  American Indians were, in certain areas, more advanced than the rest of the world in mathematics and astronomy. American Indians were the first peoples to cultivate a number of different foods and goods that are still high demand products in today’s international market like tobacco, coffee, chocolate, corn, and potatoes.  Their rich cultures and heritage were greatly impacted by European contact and expansion.

Imagine if the United States government decided that they were going to suddenly permit the development of a refugee camp on your neighbor’s land without their consent, and then force you to share your home with that same neighbor.  The very thought of something like this happening is hard for most people to conceive. However, for many American Indian peoples instances like this were fairly common.  In the early 19th Century, a growing, poor Euro-American population in the South saw the success of the Cherokee and other indigenous peoples in agriculture as well as other prominent forms of economic development and grew frustrated with their own circumstances.  Many American politicians received the frustration of these citizens and, consequently, produced and enacted the Indian Removal Act of 1830, effectively displacing all Southern tribes to federal territory west of the Mississippi—despite a Supreme Court ruling ensuring the protection of certain Southern Indian lands (see Cherokee Nation v. Georgia).  The Removal of Indians from the South helped shape many of the inter-tribal conflicts and disputes with white settlers that occurred along the California and Oregon Trails, but the strongest proponent of the trail conflicts had yet to come.

For American Indians along the California and Oregon Trails, early American pioneer stories of acquiring rich, fertile lands and great wealth often translated to the massive theft and desecration of their ancestor’s home lands. Between the Gold Rush of 1849 and the completion of the Transcontinental Railroad in 1869, American Indians along the trail came in contact with an overwhelming population of Euro-American settlers.  The swell of American pioneers coming through Indian lands during the mid-19th Century presented a number of unprecedented challenges to indigenous peoples along the California and Oregon Trails.  All these foreign peoples began to settle Western Indian peoples’ homelands—lands which their ancestors occupied for thousands of years—without their permission and often times against their will.  To make matters worse, Euro-Americans trekking along the trail unwittingly brought with them diseased livestock that not only exhausted local sources of food, but also brought foreign, highly-infectious diseases that devastated wildlife native to areas along the trails.  Some American pioneers actively encouraged violence between Indians and Euro-Americans for financial gain and, in some instances, out of personal pleasure.

As time went by, Federal employees, primarily Indian Agents assigned to areas along the trail, reported more violent disputes and at a greater frequency consisting of incidents like Euro-Americans shooting Indians for sport or hiring Indians to raid other Euro-American settler camps.  Indian Agents called for Congress to make peace treaties to amend these settler-Indian disputes. However, the attention of U.S. officials was often diverted from issues in Indian Country with other major national events going on at the time including the Civil War and Reconstruction.  As a result, many of these conflicts grew out of hand requiring immediate action from political figures in Washington D.C.

A New Kind of “Indian Problem”

By 1887, the United States claimed 1.5 billion acres of Indian land or around 80 percent of land in the lower 48 States, giving way to a new kind of “Indian Problem”.  Development of more efficient forms of travel to the West, like the transcontinental railroad, and the urbanization of Western states presented another troublesome dilemma for Indians along the trail.  The flood of more non-Indian peoples into Indian lands meant less land to go around and put more pressure on U.S. officials to delegate with Tribes.  The United States responded to this pressure by implementing a policy of cultural genocide on Indian peoples.   Rather than removing Indians from their lands as was done in the past, officials in Washington made the executive decision to remove the Indian from the American Indian or as Richard Pratt, a former Civil War Veteran and founder of the Carlisle Indian Boarding School, famously once put it, “Kill the Indian, save the man”.  Assimilation of Indian peoples into mainstream Euro-American culture became the objective of the United States government at the latter part of the 19th Century.  The United States executed the process of assimilating Indians in two major ways: forcing Indians to attend assimilative boarding schools and destabilizing the land base of Indian nations by allotting tribal land to Indian families and individual tribal members. 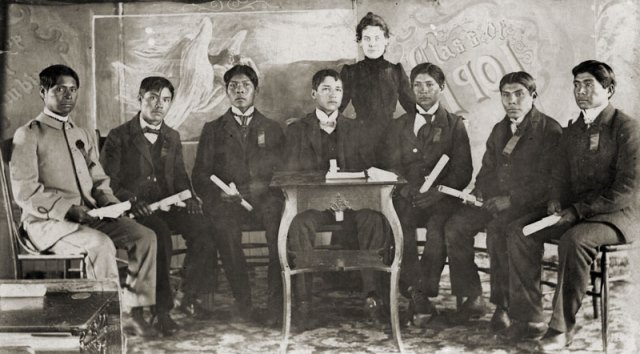 The first of the two major policies was the Indian Boarding School system.  In 1879, Richard Pratt founded the first federally funded off-reservation Indian Boarding School, the Carlisle Indian Industrial School at Carlisle, Pennsylvania.  The Carlisle Indian Industrial School was built much upon Pratt’s military upbringing and, in fact, was built upon the grounds of a former prison barracks.  Students at Carlisle were treated much like prisoners: instructors cut the long hair—a sacred part of one’s identity—off male student’s scalps and without their consent; they were given Euro-American names and were forbidden to speak of their traditional names; instructors routinely beat students for making any attempt to connect to their Indian upbringing including speaking their traditional language; and federal officials often took children in as students by coercing tribal leaders or parents into agreement with their terms of enrollment.  Carlisle was just the beginning of an era of cultural obliteration in American Indian communities.

Many other off-reservation Indian boarding schools emerged elsewhere in the states using Pratt’s militant model and were often heavily funded, taught, and, therefore, controlled by Christian organizations.  These schools churned out generations of Indian peoples who had little or no connection to their traditional identities, spiritual practices, languages, and family.  These federally-funded, off-reservation boarding schools continued to induct Indian students, without consent from their parents, into the late 20th Century.

The second policy was allotment.  In 1887, the United States government enacted Dawe’s Severalty Act or the General Allotment Act.  Senator Henry Dawes, Massachusetts (R) and founder of the Dawe’s Severalty Act, was greatly motivated to find a solution to the “Indian Problem”.  The act provided for the distribution of tribal lands in 160 acre land parcels for the head of the household and 80 acres for each unmarried adult.  After all the land was distributed among tribal members by using the aforementioned formula, the U.S. designated left over lands as surplus lands available for Euro-American settlement.  By transferring tribal lands to individual and families for private ownership by tribal members, United States officials hoped to dissolve leadership of tribes over their peoples as well as tribal communities.  For Indian nations affected by the Dawe’s General Allotment Act, the intentions of the Dawe’s Act was met with great success.

Another major effect of the Dawe’s Severalty Act was encapsulated in a provision providing that American Indians could not sell their allotted lands till 25 years after receiving ownership of land.  The problem with this stipulation came about with another policy that provided for support of tribal members if they took up agriculture.  Most American Indian peoples affected by the Dawe’s Act were not farmers and had little to no desire to pick up agriculture.

Today, the effects of Assimilation Policy and Western Expansion are still seen in American Indian communities. The impact of Indian Boarding Schools, for example, is felt all over Indian Country by both elders and youth, Plains Indians and Inuit, in politics and daily life. As some American Indian peoples’ last fluent speakers have died, they have seen a simultaneous loss in their traditional understandings of life. Language, cultural values, spirituality and/or philosophies help us to define the world around us. When we lose these things, we lose our understanding of life, and for many Indian communities, a traditional understanding of life.